my favorite Lego set ever! 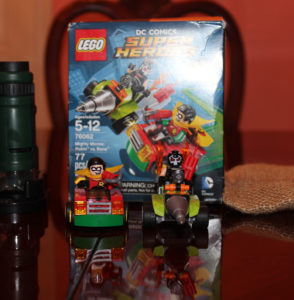 Robin is my favorite superhero (outside of the Longbow Universe of course) and I have been wanting this set since I saw it in the Lego magazine.   I was so thrilled with my gift that I built it immediately after I opened it, I didn’t even stop to take today’s picture!

As for everyone else, they got…

From left to right, Veronica now has a Spirograph, not just any Spirograph, but a Super Spirograph.  It comes with a bunch of different pieces to make different designs.

Christopher got a Metal Earth helicopter.  In case you didn’t know, Metal Earth makes small models that come as flat sheets of metal with designs in them and perforations to fold them.  You cut them out and then fold them into the model.

Anne got nail polish.  I understand this is a good gifts for girls, but I don’t get it.

Nathaniel also got a Metal Earth kit.  His was The Black Pearl, our first Metal Earth boat.

Jonathan received a pocket microscope.  Now he can carry a microscope with him at all times for emergencies.

I got the Lego set (which I have talked about sufficiently).

Nicholas was given Gunslinger.  It’s a cowboy themed card game.  Now he has a nerd game too!

Mom gave herself a new pair of shoes.  Another girl gift I don’t really get.

Finally, Dad got a Metal Earth plane to build.

Yep, today was another big  day of Christmas.

A Lego mini-figure!  You know, to ride in our new ride on Hot Wheels! 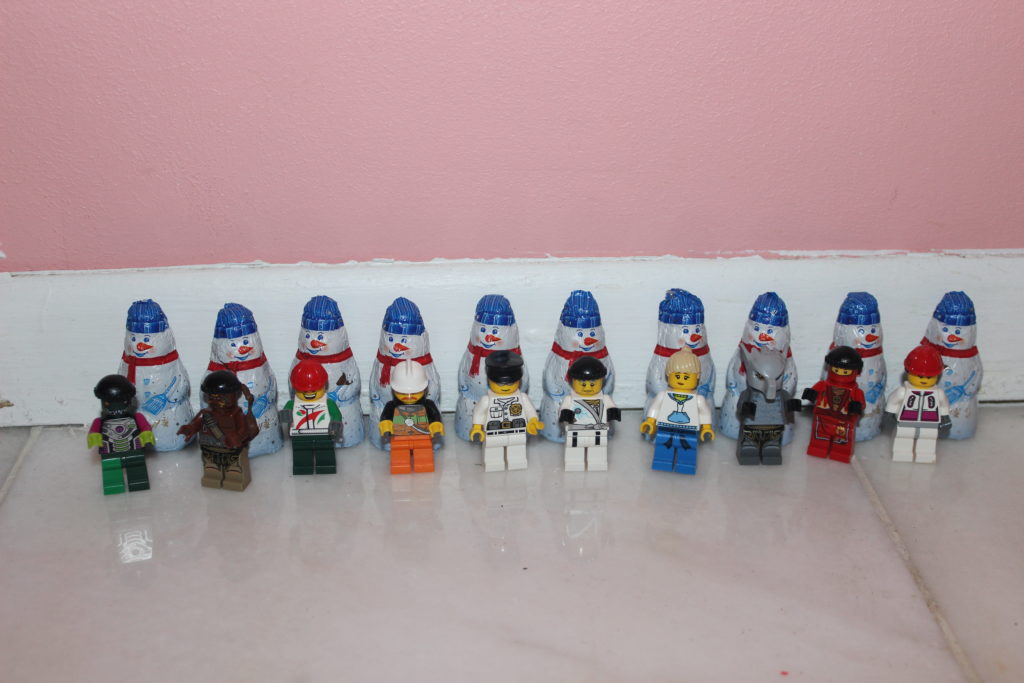 Even though mini-figure day always goes over really well in our family (because we all really like Lego),  Mom also gave us a tiny chocolate snowman.  The snowman probably also could have ridden on the Hot Wheels car, but I ate him first. 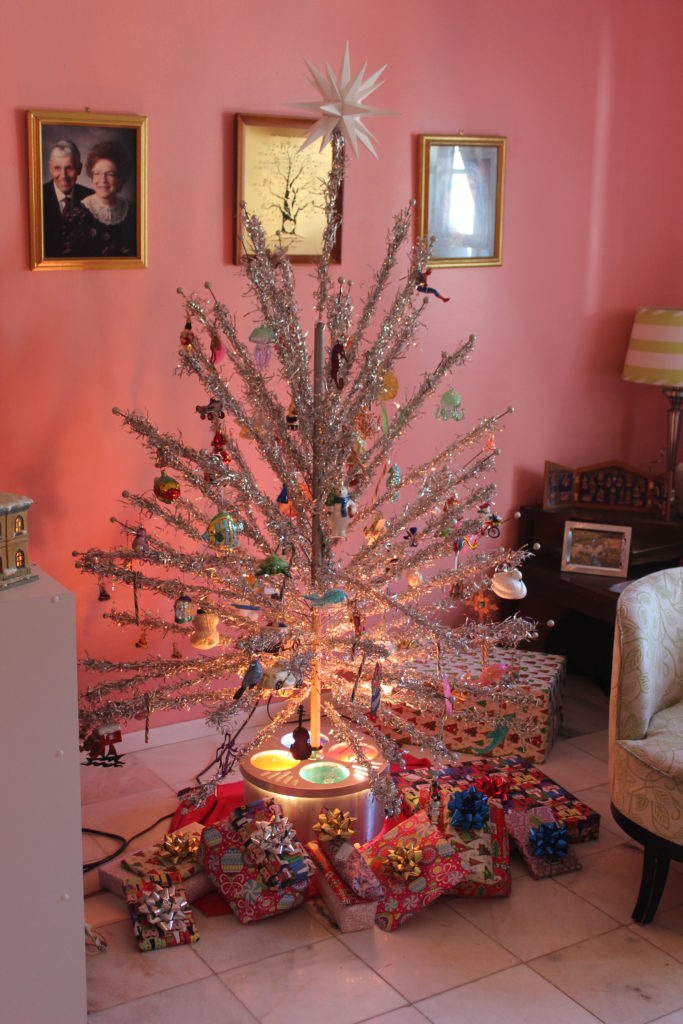 Obviously yesterday is what would be considered a “bigger” day, but we didn’t open the gifts until later.  Nicholas and I were out working and we didn’t get home until 5:30.  After we came home the family ate dinner, and then we had to clean up.

Now I don’t mind opening gifts late, but I think the suspense was getting to some of my younger siblings.  Apparently Robert told Mom that we where just staying out so that everyone had to wait!  He was joking of course, he knows we wouldn’t strain their curiosity intentionally.  Plus,  Nicholas doesn’t like to wait either.

When we did finally open the gifts and sate my siblings swelling thirst for satisfaction, we found that the day didn’t really have a theme, except perhaps that most of the gifts could be used by multiple people (what could be more glorious than ten big gifts that everyone can use!?).

Dad and Mom got a set of rubber coated kitchen utensils to use with their brand new ceramic coated copper pots and pans (which they also got today)!  Mom has wanted ceramic pans for a while as they work well for eggs, because they have a non-stick surface, but they don’t use Teflon which can peel off and prove detrimental to your health.

Nicholas got a new phone, because his phone has been dropping calls, no doubt due to the phone itself being dropped one too many times (admittedly the last time was my fault).

I own a sizable bottle cap collection, so I got a bottle cap dart game.  It’s a large magnetic dart board in the shape of a bottle cap.  The game also came with bottle caps to throw at the board, but I have cooler “darts” to use.

Jonathan got a Wii video game that Nicholas and I found at a garage sale for two dollars.  The case actually had two games inside “Wii Sports Resort” and “Wii Sports.”

Nathaniel was given some sparring gear for him and the younger boys to use.

Anne received another video game, “Mario Kart Wii.”  Nicholas and I also picked this game up, same garage sale, same price.  This was quite the find since that game still sells for 30 – 40 dollars on ebay, even though it’s for an outdated system!

Christopher unwrapped the other set of sparring gear to use to battle Nathaniel.

Robert received an art pack and a sketch pad, because he is quite an art enthusiast.

Finally, Veronica opened (actually we opened from youngest to oldest last night, but who’s keeping track?) a cross stitch kit for an owl picture.  This gift was perfect for her.  She calls him Oliver the Unfinished Owl, but she’s been working on him all day and I think she’s almost finished!

Yesterday was actually Veronica’s day of Christmas.  Veronica is the youngest in the family and only seven years old (so we had to appreciate the gifts no matter what :-).  Hot Wheels cars are always appreciated actually, they are another family tradition, but this year they are even cooler than usual.  “How?” you ask.  How could these tiny toy cars possibly get any more impressive?!  Simple, Hot Wheels has finally accomplished what I’ve said they should…they’ve designed their cars for Lego guys to ride on!

First K’Nex is designed to work with Lego and now Hot Wheels!  I can only say what my brother Nicholas said when he first saw the ride on Hot Wheels car at the auto parts store, “What a time to be alive.” 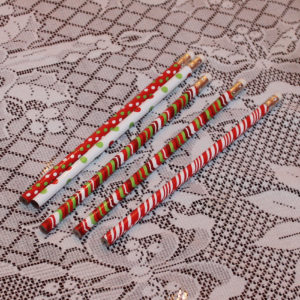 That’s right, every year we get twelve gifts, but not all of them are big gifts per se.  Like everyone else we get knick knacks and stocking stuffers, but instead of overlooking, or largely not appreciating,  these small gifts in the frenzy of the Christmas day unwrapping madness, we have a whole day to revel  in and treasure these gifts.  So while twelve days of gift giving doesn’t make any of the small gifts bigger it does make them a seem bigger.  In fact, as my sister Anne said, “Pencil Day is traditional and it just wouldn’t be Christmas without Pencil Day.”

Aside from being the second day of Christmas, today is also a feast day in its own right.  As you may have guessed from the title of this post, today is the the feast day of St. Stephen!  (I told you December was rife with holidays).

St. Stephen is one of my favorite saints.  Besides being my patron saint he is basically the embodiment of what I would like to be.  He was not one of the disciples, so he was not a bishop, but he was one of the first priests.  He was also the first Christian martyr (I’ve always liked to be the first to do anything).  Even more than that, he was martyred because when the pharisees told him to stop preaching about Christ he refused and spoke out against them.  Yep, he was martyred for being mouthy for Christ, is their anything more glorious?

How does one celebrate the feast of Stephen you ask?  Well, actually I ask that too.  Aside from singing the festive St. Stephen song, Good King Wenceslas, I don’t know of any St. Stephen’s day traditions…today is also known as boxing day somewhere , maybe Nathaniel and I should go out this evening and spar a round.

A bunch of games!  Actually everyone got one game.  You see in our house instead of getting all of our presents on Christmas day we get one present a day for the twelve days of Christmas.  Mom and Dad handle the gift giving for most of the days of Christmas, but the groups of the children have taken it upon themselves to give the gifts for one day each (that way the parents still get to be surprised). Anne and Nathaniel like to do the first day of Christmas (they are historically impatient), so yesterday they gave us our gifts.

From left to right (and youngest to oldest), Veronica got Mousetrap (one of my old favorites).  Robert got a Lord of the Rings card game and Christopher got the same game so that four people can play together (in a large family you want very few two player games).  Anne broke the theme a little, Nathaniel gave her a kit for crocheting Marvel superheros.  Anne gave Nathaniel a display case for his bug collection (now he can stop keeping it in a shoe box in our bathroom).  This gift was also a little off theme, but Jonathan got us back on track with a monster based dice/card/board game, King of Tokyo.  I got a very cool superhero card game Sentinels of the Multiverse. Nicholas got the classic game Battleship.  Mom broke theme again, she got eight wash clothes hand knitted by Anne (now you know why Anne got a crochet  kit, she’s very crafty with string and yarn).  Mom also got  a cardboard house to match her cardboard Christmas village.

Pretty cool, huh? I love it when a good theme comes together!

Merry Christmas everyone! I know I did not put up many posts about Christmas, and I would have, but we were really busy, and besides we did not even start decorating till yesterday. Maybe I will write a post about the decorations or our gifts later, but right now we haven’t even opened our gifts yet. Till then I hope you all have a wonderful time at your parties or at home. Merry Christmas!

So, this evening while we were doing the dishes, we were discussing the North and South poles, and Stephen pointed out something rather amusing. The phrase Polar Opposites means that two things are very different, but the poles are two of the most identical places on earth! They both have a sunless winter, and they have similar housing conditions, because no one wants to live there because it’s freezing!

Not whatever that was.

The other night we watched the new Tarzan movie.  This was a sad mistake.  Not only was the movie quite anti-Catholic (which is truly annoying in this era of so called inclusion. Apparently we are to be accepting of anything today, except for religion), but also the movie was a total travesty in it’s portrayal of Tarzan.

I greatly enjoyed the original Tarzan books by Edgar Burrows, and I could have lived with the serious dubbing down of the ape mans superhuman powers (I mean what kind of Tarzan can’t beat Akut?), but the total alteration of his character is unforgivable.  Tarzan was not the sad Englishman who reviled his former way of life and reluctantly embraced his past as he was portrayed in the movie.  Rather, he was a proud, but noble man who took great joy in life.  He was a man of honor, even as a wild man.

He loved his home and his wild ways and did the much greater feat of giving up what was most dear to him to please his wife.  Indeed he would not even have worn more than a loin clothe, but to please Jane.  Not that Tarzan ever enjoyed killing other men, rather he always knew it was unnatural and avoided it as much as possible.

Tarzan was also not a naturalist as he is always portrayed in modern media.  He liked animals, but he understood he was above them and had no problem killing them, even killing them for sport.  The animals followed him if not because they liked him, because they knew he was far more powerful than them.  The Tarzan in the book was greatly different than the one portrayed in the movie and this is greatly disappointing.

Also why was Nicholas Rokoff not his villain?

Suffice it to say, I was not impressed.