I was walking to my convertible from school yesterday  when I spied a large bird loping awkwardly through the grass.  Normally I would have thought nothing of this as I live in Florida and birds half your size are as common as alligators (that’s really common), but something was different about this bird, something was off, something was missing…Oh, it was his right leg.

Yep, somehow this fellow had broken off this essential appendage just a few inches below the flesh of the drumstick.  Still despite his crippled condition he fights bravely to survive (I mean the only other option is die…so maybe it’s not quite so brave…).

Now you’d think a one legged bird would be limited to a life of perpetual flying punctuated by brief rest on his singular perch, but you would be wrong.  if you think such a creature can walk you would also be wrong (you can’t walk with one leg it’s physically impossible).  Instead of either option such unfortunate avians hop away from danger. Observe…

I like to think that this poor fellow forever forfeited his ability to walk in some gruesome fight for life and limb (well he half won) with some fearsome predator like the Florida panther or a vicious alligator.  Or perhaps he was rock climbing and a rock slide trapped his leg so he had to peck it off.  But I’m afraid that in reality he probably lost his leg in the more common and mundane way, hunting great white whales.

Unfortunately, I’m afraid  we’ll never know the true story behind this bird’s broken off bones.  He flew away before I could ask him.

I would have let him have the book rights.

(These videos can be seen combined on YouTube here).

Hi everyone, I’m Stephen. Today in a flash of genius I realized I could create different accounts for each member of the family.  What does this do for us you ask? This makes it so the poor readers(that would be you) can finally tell which family member has written which post!  What?  You knew that all the time? Why didn’t you tell me?

Anyways my genius (or lack thereof) aside, in case you’re not sure which member of the family I am I’ve attached a family picture.

That’s right, Veronica is learning the clarinet!  So as the senior woodwind player (well now I feel old), I am in charge of teaching her.

As you may know, Veronica is the youngest in the family  (only seven years old).  You might not know that we did not give her the nickname tiny girl.  Rather, this was self inflicted.  When she was a toddler Veronica would declare, “I’m a tiny girl,” pretty much in any and all situations.

But I digress, At 42 pounds Veronica’s still pretty little, especially since her brothers look like a football team when all together (minus the shiny pants).  She’s so little in fact that her slim fingers don’t cover the bottom holes on the clarinet! (well I guess playing scales is out).  Furthermore, when she first started playing the instrument I had to hold the bell while she was playing because she wasn’t strong enough to hold the massive woodwind!  Despite this small obstacle (get it?) she’s doing amazingly well and can play five songs!  Great job Veronica give yourself a pat on the back (just not while holding the clarinet please!) 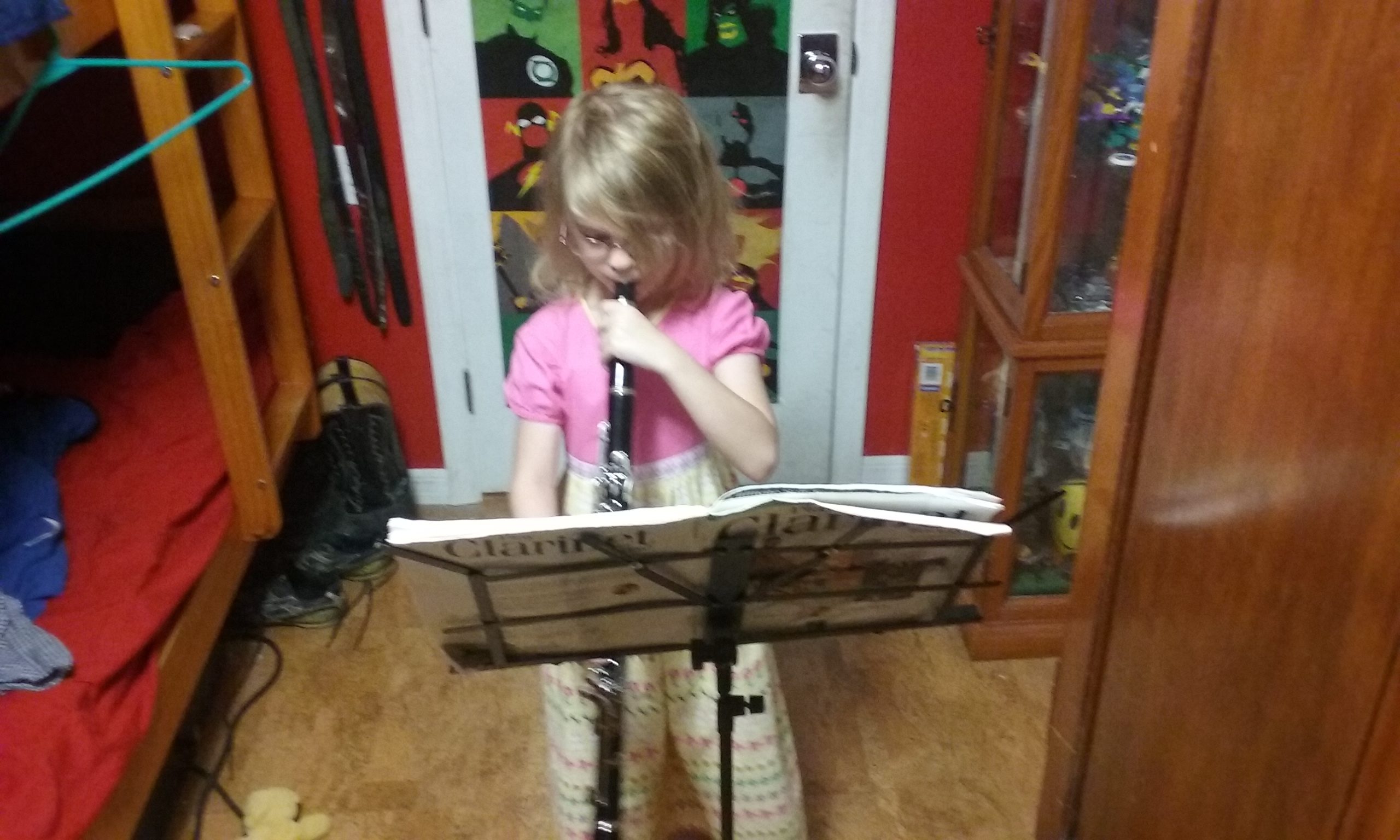