About a week ago Aunt Myra and her boys came down from Ohio to visit along with Uncle Chris and Aunt Diane. It was a really great time! One funny thing did happen while we were out looking at the pool. Dad invited the cousins to make use of the pool if they wanted. Somewhat surprised one of them asked “When’s swimming season down here?” I explained that as the pool is heated, we swim year round. Everyone had a good laugh about it all. Just a difference between here and Ohio!

One of the really neat things about a family business is that everyone gets a chance to contribute. Sometimes the work they do isn’t specifically related to the business, instead it contributes to the house running smoothly so that the business can run smoothly.

Christopher and Robert have done a lot lately. The two of them a still a little young to be able to do a lot on the comic book, so they’ve picked up some of the work Nathaniel, Anne, and Jonathan usually do. This lets the three of them do more work on the comic.

There are many ways to help.

Longbow took part in the Chalk for Charity event in downtown Lakeland 2013 and 2014. Chalk for Charity is an event put on by the local Knights of Columbus Council to raise money for various charities (last year it was for the Columbus Global Wheelchair Mission and The Lakeland Citizen’s Police Academy Alumni Association).

In the first year Stephen did a most of the work himself with everyone else filling in some color here and there.

Then last year everyone got to help out! 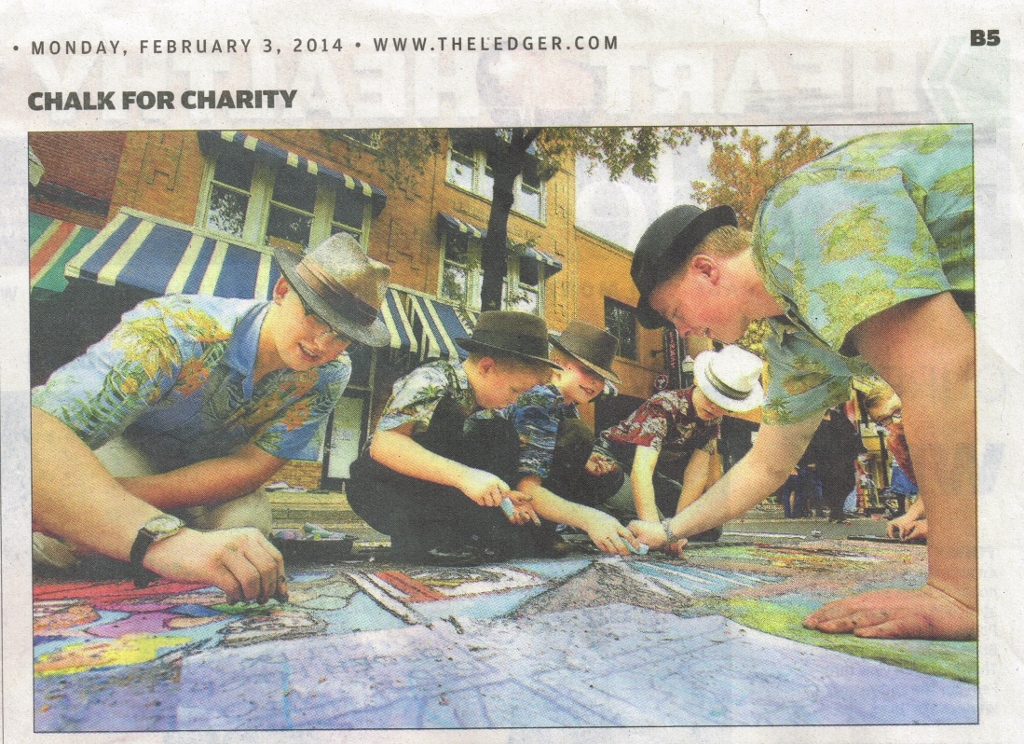 That’s a picture from the Lakeland Ledger. The girls weren’t there right then, but it gives the general idea. The picture turned out great!

Progress on Zombie Blastin’ Gun continues well. A new original and new parody are being discussed. Copies of comic #3 will be in house Wednesday. Very excited!

There are a lot of places to visit in Florida. The Circle B Bar Reserve is a good example.

With several different trails, it’s a really fun way to see a lot of different wildlife. We were out yesterday and saw this big fella a few yards off the trail.

That was the closest we could get for a picture. This sign says it all!

If you’re more into animals that won’t eat you, they have a lot of these….birds?

So if you like walking in the sun enjoying nature Circle B is the spot. Just don’t get too close!

And now a comic by Stephen. This one features Robin Hat and Buckeye. These guys are two of Stephens earlier heroes, and they might have been an homage to something. Hmm…

Did you know that New York has a specific provision in its housing laws forbidding discrimination based on lawful occupation? This means a person can’t refuse to rent or sell property based on the renter/buyers occupation (provided it’s legal, of course). This is something of an interesting provision. The story of how it came to be is even more interesting.

For awhile, it was difficult for lawyers to find places to live in New York. It’s always a chore to hunt for a rental, especially in New York, but this was made even more difficult by the fact that many landlords would refuse to rent to attorneys. In general, this was because lawyers are more likely to read the lease before signing it and MUCH more likely to sue if landlords fail to uphold their end of the bargain. So what changed all this? Well eventually attorneys got fed up and started a lobby. Eventually they got a New York law written containing the provision mentioned above. And thus the problem reached an amicable resolution.

There comes a time in every car’s life when it decides it needs to break. This week we had two cars acting up. First the boys convertible became became a ‘vertible (that’s a convertible that won’t convert). After a few hours of work, including  pulling the backseat, Jonathan and Nicholas replaced the leaky, passengers side, hydraulic cylinder.

The job is really not a long or difficult one, it’s really just slightly inconvenient. It could be a lot worse!

Then later on Dad got back to the house and his car has overheating. Popped the hood to hear a loud hissing and see some leaking coolant (warm coolant is special smell). Turns out the culprit was a loose thermostat housing bolt. One of the boys tightened a bolt yesterday, but not the right one.  They got the right one today.

The other day Christopher had to write a poem for his grammar about two opposite subjects. He also had to write it in a diamond shape (or a close approximation). This is what he came up with.

it is, but dark

The other day, Nathaniel wrote a paragraph for his grammar which was rather amusing. Here’s the exclusive, unedited version.

Oh, to sit at a desk and write. The words pour from my pen like water over a waterfall. What joy it gives me (when I do it right) to show that finished work to someone. And that thrilling chill when a smile creeps over their face and I wonder is it from my horrible grammar or was it actually amusing.

He’s a good writer and a bit of a silly. It gave Mom a good laugh!