Today I will tell you Joe McDonald’s take on the Jackie Robinson story.

As you may remember, Mr. McDonald was batboy for the Cardinals when Enos Slaughter spiked Jackie Robinson at Ebbets Field.  Since Mr. McDonald sat in the opposition dugout he had a great view of the game.  Mr. McDonald saw everything and his opinion is that the spiking was unintentional.

According to Mr. McDonald, Jackie Robinson was not a trained first baseman.  When the Dodgers brought him up to the major leagues, they played him at first.  Mr. McDonald explained that there is a different way to hold your feet so you are less likely to get spiked (who knew?).  Most stories make it seem like the spiking was racially motivated, but Enos Slaughter denied it. He said it was just because of his rough playing style.  As Mr. McDonald said to Mom and Dad, “Was Enos a racist? Maybe, but the spiking was unintentional.”

So there you have the scoop on the spiking of Jackie Robinson. Here is one more of Mr. McDonald’s rings. 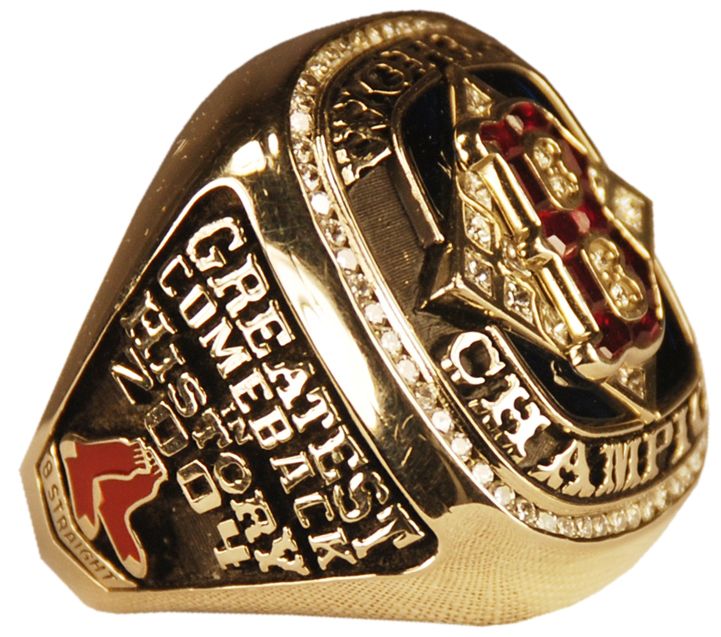 It has nothing to do with the story at hand, but I thought it was pretty cool.

As promised I will tell more tales of the Five Golden (Baseball) Rings, but not all of them…yet. What can I say, I like suspense.

This is the story of Joe McDonald’s first negotiation in baseball. When Mr. McDonald was fourteen he worked as a batboy at Ebbets Field. This was back before the Dodgers stopped playing there and made Terrence Mann sad (Field of Dreams reference!!). The opposing team on this particular day was the Cardinals. And they had no batboy.

Now the Cardinals manager at this time had a bit of a reputation for being, shall we say, a bit uncouth. In other words he was a hothead that preferred strong language. He swore a lot. Yeah that’s what I’m tryin’ to say.

Mr. McDonald called the manager up and asked how much a batboy for the Cardinals made per game. “Three dollars” was the reply. “Well I’m making six dollars right now” was Mr. McDonald’s reply. “CLICK!” was the manager’s enraged reply. So Mr. McDonald waited…

About a half-hour later the Card’s manager called back (after striking out trying to get another batboy). “I’ll pay ya five in cash. It’s the same since you won’t be paying taxes.” Mr. McDonald considered it and agreed provided he threw in two baseballs. With a harrumph the manager grudgingly agreed.

Mr. McDonald ended the story saying that even though as a general manager he’s negotiated multi-million dollar deals with ball players, he still recalls his first negotiation.

Today Mom and Dad came home and said they had a story. Not just any story, but a good story, a REALLY good story. They saw something they had never seen before. Naturally that was pretty intriguing! Can you guess what this is? 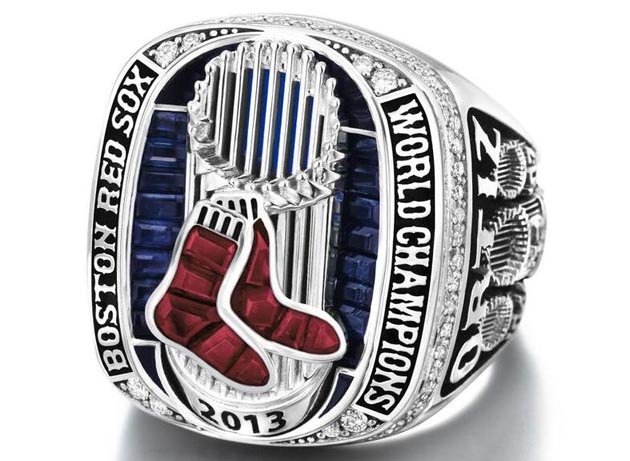 If you are still unsure, it’s a 2013 Boston Red Sox World Series Ring.

Let’s start at the beginning (a very good place to start so they say). Mom and Dad headed to church for confession on Good Friday. They wanted to go before Easter, but the doors to the church were locked. They started back towards the car, but were stopped by an older gentleman who asked “Do you mind if I tell you how much I love your family?” Dad (being a very unassuming person) didn’t mind at all. Go figure.

They talked for a bit and the man introduced himself as Joe McDonald. Mr. McDonald told several different stories. One was about being a bat boy for the Dodgers.  He told another about his part in the Sparky Anderson and the Pope story. See Mr. McDonald was the general manager for the Detroit Tigers, so he and Sparky were “like this”. That’s an exact quote if you were wondering. He also told how he was in the opposition dugout when Enos Slaughter spiked Jackie Robinson’s leg at first base (and his take on the incident). Rest assured future blog posts will convey these stories. Mr. McDonald was in hurry since he had to go to a game in few minutes. He’s the Florida scout for the Boston Red Sox, hence the hurry.

Finally, I come to the point. Before he left Mr. McDonald showed Mom and Dad the ring on his hand and it looked like the one pictured above. Yep, it was a 2013 World Series ring. Besides that ring he’s earned four other World Series rings, but he wears them at different times. Probably doesn’t wear them all together in order to help facilitate arm movement. Those are big rings!