Forced to pursue the villainous Elephant the Armadillo of Legends struck out across the clearing toward the neighboring village. Though still thirty yards away the Armadillo could already detect the effects of the mayhem. The fires roaring atop the buildings, the smell of burning tar and hay, and the shouts for help, mingled with the insane laughter of the evil Elephant. He hurried forward.

As he entered the village he surveyed the wreckage, trying to find the mad Doctor Elephant. This did not take long. Despite the Elephant’s immense weight he sat with astounding grace on a slender, floating, broomstick. The Elephant attacked the villagers alternating with his two weapons, a small wand, and a lazer-crossbow. The Elephant’s unearthly weapons, and his eerie laughter perturbed many of the villagers causing them to run in fear. The Armadillo however, is without fear. Sneaking up behind the Elephant he hurled his boomerang at his his foe’s voluminous head. The boomerang rebounding off the back of his head, the Elephant turned around trumpeting in anger. Unfortunately, the Armadillo had underestimated the strength of his enemy’s skull.

“Who dares to strike ME!!!”, roared the Elephant.

Even after he had discovered his assailant his eyes continued to dart from place to place. This rapid searching, almost nervous motion was contrasted by his seemingly calm and respectable demeanor, giving him the air of an insane mystic.

The Armadillo, however, wasted no time on a such a character study, insightful though it may be.  Rushing forward he jumped, twirled in the air, and struck the Elephant full in the face with his right foot. Following this with a shield brought heavy against the same target.  The Elephant fell from his broomstick. Recovering himself the Elephant fired two bolts with his gun that the Armadillo easily parried. While he fired he waved his wand in the air, summoning a large wind which blew the Armadillo away from him.

“Impudent FOOL!!!”, the Elephant roared, “You think you can attack ME; The Strength of Sages, The Duke of Doom, The Lord of Lard; and expect get away with it?!!”. The Armadillo snickered involuntarily at this last title, which only served to anger the Elephant more. Trumpeting out a vicious war cry, the Elephant bore down on the Armadillo putting all his weight behind his mighty charge. Placing his shield in front of him the Armadillo braced for impact. 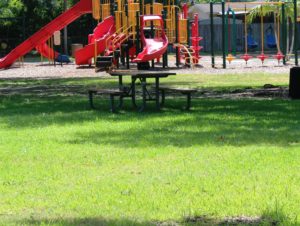 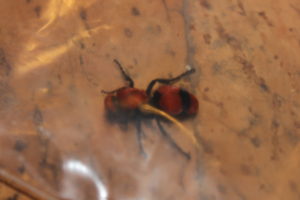 Who would win in a fight: Captain Marvel or Superman? I’m just kidding. It would obviously be Captain Marvel. The thing is, Superman is weak to kryptonite and magic. Captain Marvel’s powers come from magic. Not to mention, if two Supermen fight one will lose. Two Captain Marvels could fight forever and not get defeated.

So while I was weeding the other day Robert was… Also weeding. Only instead of a nasty toad, Robert found a lizard nest. 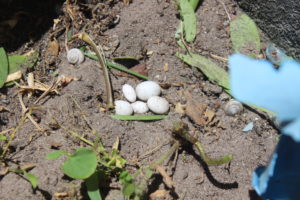 One of the ways you can tell that something is a lizards egg is that, for one thing it will be egg shaped, and the other is that a lizard egg is kinda soft and leathery. I didn’t always know what a lizard’s egg felt like. In fact, I found one once before, and I just thought it was a weird rock. So I tried to squish it. Fortunately the lizard inside the egg wasn’t hurt, it just came flying out of the shell looking really confused, then ran away. We saw one of the eggs hatch (without being forcefully ejected) this little black lizard. 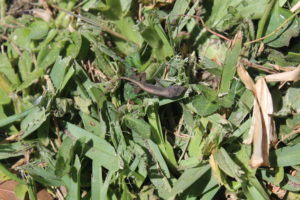 I wonder if maybe all baby lizards are black, because both the newly hatched lizards I saw were. I don’t know though, it might just be a coincidence.

Yesterday, while I was pulling weeds by the pool enclosure, I noticed this toad buried in the dirt. 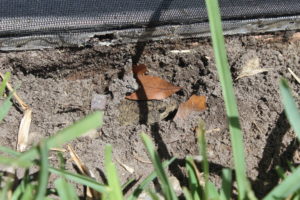 It might have buried itself to avoid the heat, or it might have buried itself to avoid predators. Either way it blended in very well and I never would have noticed it if I had not seen it breathing. Sorry toad most rocks don’t breath. It was so dedicated to not being caught it let an ant crawl over its eye without moving. I however, had already seen it and pulled it out of the dirt. At this point, the toad did one of few things a toad can do in defense of its life. Leaping forwards it sprayed pee (literally) a foot behind itself. IT TRIED TO PEE ON ME. Yeah that’s right, toads are nasty little animals.

The Barons of Evil flew down from the sky riding a strange, red, flying vehicle. It had a large body in the middle and on the sides were the wings, each with a large turbine on them. 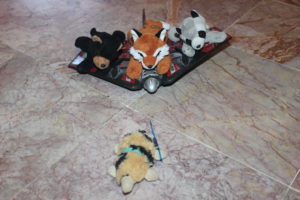 These villains alighted in front of our hero and as they did so the fox opened his mouth as if to speak. He never got the chance. The Armadillo leapt forward with the ferocity of a lion. Taking them by surprise the Armadillo smashed the bear across the face, knocking him off balance. Rushing forward he  slashed at the fox, who he knew to be their leader. To his great surprise his sword glanced off.  His foe was protected by a very clear panel of strong glass. From behind the Armadillo a bolas swooped through the air, rapped around the Armadillo’s feet, and he fell off the ship. He had forgotten about the racoon.

The ship quickly drew backwards and up a little as the devious leader of the motley crew began issuing orders. “Slew Foot quick, get behind him. Count Drakecula, grab your weapons and descend from the ship.”

Even as the fox uttered his commands, the bear known as Slew Foot leapt the immense distance, and stood some ten feet behind the Armadillo.

The racoon, whom the Armadillo now knew to be Count Drakecula, stood before the ship sword in hand, as the fox continued. “Did you really think I would just “let” you attack me? Come on guys, I tried to be reasonable, but now we have to do this the hard way.” 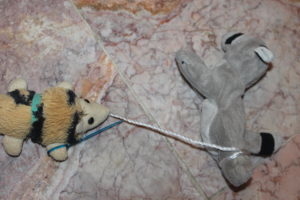 As he spoke Baron Fox flew towards the Armadillo spraying fire as he went. The stouthearted warrior flipped backwards to avoid the fire, and was smacked into a tree by the strong arm of Slew Foot.

“Now that we have let off some steam,” said Baron Fox, “maybe you could listen to what I have to say.”

The Armadillo looked around at the three trained villains, each deadly in their area of expertise. He knew he could beat them with more supplies, more time, and a plan. He had none of these. Besides, as long as he kept them within his line of sight he could plan while the fox talked. The Armadillo glared at them, and nodded his assent.

“Good.” said Baron Fox, “I hate fighting good guys anyways. They always win. Now I assume you want to know who we were chasing and why. As you know we are rapidly becoming the most evil group in the world. This is not because we are the most evil, but rather because we are slowly eradicating the competition. The elephant we were chasing is known as Doctor Elephant, a sorcerer/genius and complete lunatic. His evil feats are known far and wide, and he is now headed for that village in the distance. If you hurry you can catch him before he does much damage. Good luck.”

As Baron Fox turned to leave Slew Foot interjected asking, “What about the girl?”

“Oh yes.” said the Baron, “You think we kidnapped the fair princess of yonder kingdom. I’m afraid you are sadly mistaken. if you want to know where she is I would ask the Elephant. Kidnapping is not really our style. Good luck with that as well.”

The Armadillo looked at the Baron and knew he was not lying. This ability was one of the Armadillo’s rare gifts. As they left he could hear Baron Fox remarking how he loved when good guys did their work for them. He didn’t want to, but he knew he couldn’t let the Elephant destroy that town. He knew, deep inside him that the Barons of Evil and he would meet again some day.  Whether this was a comfort or a concern he did not know.

So, I’ve noticed that my blog posts haven’t been as funny as they could be recently. This was rather disheartening. Maybe I’d lost my touch (more likely I never had one). Maybe I had finally ran out of ideas. Whatever the cause I decided I had to get back to my inner-artist. So I wrote a brand new story. A story greater than all my other stories. A story that will leave people guessing. A story unlike any other. And so, with out further adieu, my great new masterpiece:

There once was a man. And then he died.

It really speaks to you doesn’t it.

Today while I was mowing the lawn I saw two woodpeckers climbing up a tree. 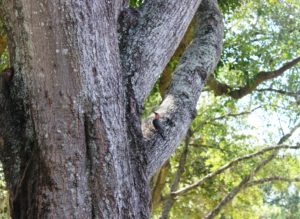 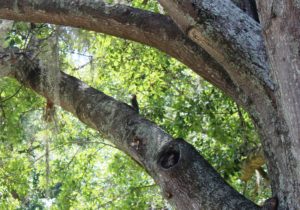 Not overly amazing, but it is rare to see two woodpeckers in the same tree. Did you know, that some woodpecker’s tongues wrap around their skull, to cushion their brain while are pecking for bugs? No wonder they can drill into wood so easily. 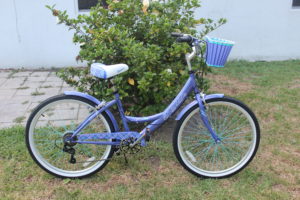 Mom used to ride to ride a bunch before we moved to Florida, but we haven’t used our bikes a lot since we got to Florida. So, Mom’s old bike needed new inner-tubes, but mostly, the bike was too tall. So we got Mom a great new bike. And also a very girly bike. So, Happy Mother’s Day!!!