I had to write a Halloween themed story for a writing class one fall semester back while I was going to Polk State, this is what I came up with.  Nathaniel posted the same story last year.  Sorry for the repeat, but it’s really the only Halloween story I’ve ever written  and I do kind of like it.

A Timeless Tradition
By Stephen Langenkamp

Put your hand in your pocket and draw out your ke-ey.
Go down to the cellar and draw what you please.
Give us cakes and ale and have thee no fear,
For we’ll come no more souling unti-il next ye-ear.”

Today I stumbled across the bug collection Nathaniel started for his science project last year.  He’s been adding to it, but only with cool bugs. 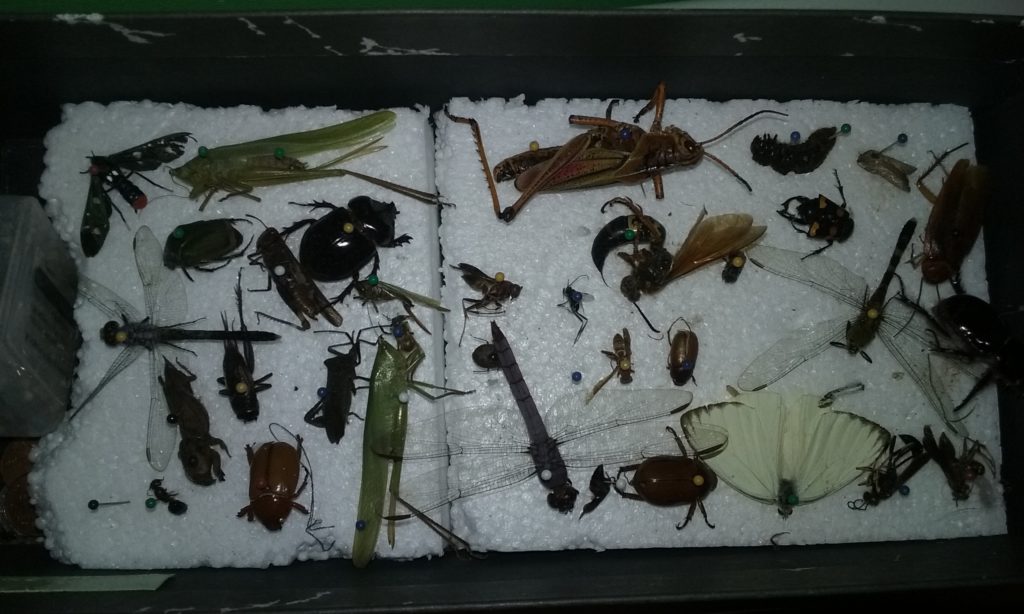 I found out today that Nathaniel has been keeping this collection in the most logical place available,  our bathroom, because… why not?

Remember the orthographic drawing of the Hat-Mobile I uploaded a few days back?  I drew that for school with the intention (and requirement) of modeling the car in a 3D program. Well I was going to show it to you today, but I’m not going to anymore.

I’m sorry, but I planned to be done with my model last night.  Unfortunately that did not happen instead I had a very frustrating night because my modeling software crashed three times.  This was a problem, but it wasn’t half as bad as the fifteen- that’s right fifteen! – bad saves.  Every file I saved last night was corrupted when I reloaded it. So I gave up.

Don’t get me wrong I will finish a model of this stinkin’ car, but I’m just gonna start fresh.  I don’t care if it’s less efficient.  so I hope to present you all with a GOOD model of this car in a couple of weeks.  If not, know that I am wailing and gnashing my teeth at my 3D modeling software, Maya (free for students).

Hi guys if you saw my post yesterday here’s a bit of advice.  Don’t post your genius plan to get out of trouble on the family blog that your mother reads.  It kind of devalues your plan.

I have a terrible migraine today.  In case you’ve never had one, a migraine is a lot like a headache, only it feels like there’s a jackhammer right behind one of your eyes.  Like the responsible adult I am I have decided that my headache is clearly due to not getting enough coffee two days ago (thanks to the broken carafe) and not due to me staying up until one thirty last night writing an assembly level computer program to solve the quadratic equation (I only had a week to do the assignment so…I have no idea what I was thinking).

This bit of genius (blaming my headache on coffee not working into the A.M. on a complex computer program) lead me to an even greater stroke of genius.  I’ll just blame all my problems on coffee (or rather lack of coffee).  I play my song wrong, not enough coffee.  I draw Nightstick, but he looks like a badger, not enough coffee.  I drop a plate while clearing the table, too little caffeine.  It’s a perfect plan!

I mean they better be, otherwise I better change schools, but that’s not what I mean.   I received a notification today that I was eligible for early course registration (I finally get to register with the big boys!).  Early registration for the spring semester begins on October 31st… at midnight.

Is the next semester going to haunt me?

You guessed it I have a test today.  A midterm actually, and it promises to be grueling (well at least unpleasant). So I ask in all seriousness, why on earth on a Monday?  I’m  not complaining… no I guess I am, but I have a good reason too, darn it!

Scheduling a test on the day immediately after a weekend is a sure way to ruin a weekend.  After all, that’s your only time to study.

Aside from this arduous fact, the test is scheduled on the one day everything is guaranteed to go wrong on a Monday.  Mondays are so bad that they make their way into eighties songs and popular comic strips as the subject of scorn and derision.

The only reason I can think that someone would willfully put their test on Monday is because they hate all their students and want them to fail!… too much?  You’re right, too much.

But it sure is annoying.

A big thanks to the Grace Manor for having us come play our show yesterday.  We had a great time and the staff was very helpful.  The people there were all enthusiastic and appreciative. They really seemed to like our show, almost as much as they liked Veronica.  She is a tiny ham.

(Of course I just posted a picture of me so I’m not really one to talk.)

We had so much fun performing we forgot to take any pictures except for Nicholas who had the presence of mind to take the one of me and one of our delightful audience.

As you probably know I’m part of a band called Longbow.  All of my bands members are also my family members (which is really nice because I already know all their names!).  Yesterday we were practicing together.

Dad said, “That wasn’t quite right, go back to the key change.”

To which Nicholas – in all seriousness – replied, “What exactly is a key change?”

I was working outside in the rain with my younger brother Jonathan when it started raining (in Florida the weather can go from sunny to rainy in 0.0 seconds).  As my brother and I were pelted with atmospheric precipitation Jonathan says to me,  “You know sometimes I wish I were made out of water so I wouldn’t get wet.”

“What?” I cried incredulously, “You wouldn’t be wet, you’d be water, you’d be the embodiment of wet.”

Jonathan stuck to his guns, “Water can’t be wet.”

Now you might think that Jonathan was on to some great philosophical truth for wanting to be water to avoid being wet, but I think it’s crazy, I just wanted an umbrella.