The other day we spotted this guy on our fence. 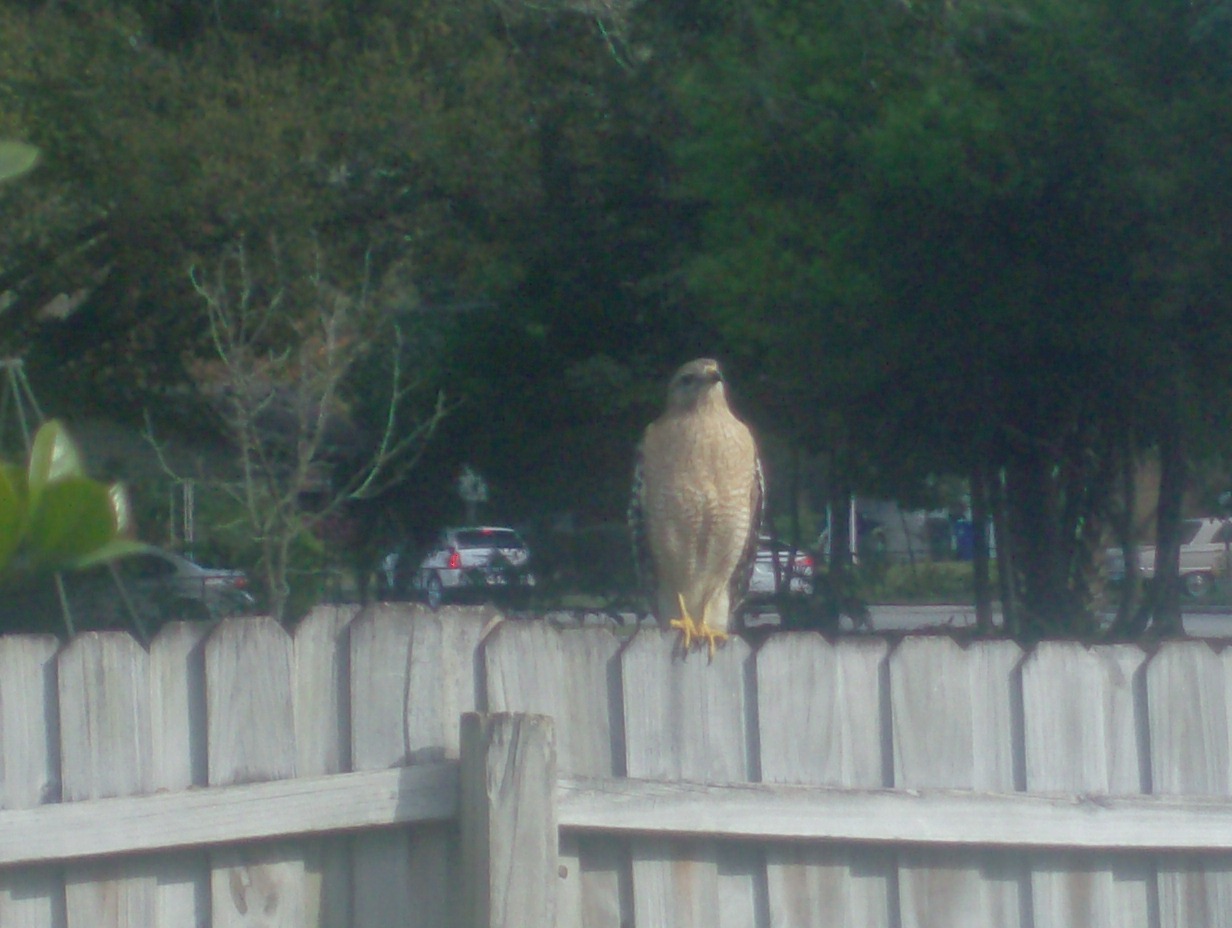 He sits there and on the telephone line along with another hawk, and we think they are nesting nearby. Another cool thing about living in Florida!

The other day Veronica was correctly answering Robert’s science questions. As it turns out, Veronica has been reading not only all the science books but also the dictionary, encyclopedia, and basically anything she can find. Pretty good for a six year old!

Nathaniel wants to be a writer so he wrote this short story.

Why Warthogs have Tusks

A very long time ago, when the animals were still young, no one in the pig family had tusks. Now one day the smallest and weakest of the pig brothers the Pink Farm Pig went down to the pond to get some water because the pig was very thirsty. As he went he looked all around for Water Elephants. Water Elephants are what hippos were called when they still had tusks. They were mean practical jokers and liked to scare people. However as the pig did not see any Water Elephants he went down and stooped over to get a drink. At that moment a particularly mean Water Elephant named Po rose up from the water splashing and bellowing. This frightened the Pink Farm Pig who was very small. This scare made him run back to his home without getting any water. “This cannot go on,” said the Father Pig. “No father,” said the Bigger Black Pig. So the Bigger Black Pig went down to the pond and he thought,” I will not be fooled.” And he took a big stick in his mouth and started poking the water. But to his surprise the stick began to pull on him. In his shock he let go of the stick and once again the Water Elephant came up roaring and splashing and bellowing and chased the Bigger Black Pig away before he could even take a sip from the pond. ” This cannot go on,” said the Father Pig. ” No,” said his son the Boar. Now the Boar was the craftiest of all the pig brothers and so as he went he took with him two rocks and some whale oil. He was sure he would not be fooled. As soon as he reached the pond he poured the whale oil on it and then he took the two stones and hit them together which showered sparks on the oil and set it ablaze. Sadly however the Water Elephant was hiding in the forest behind the Boar so Po again ran out roaring and bellowing and chased the frightened Boar away. ” If this happens again someone must pay,” said the Father Pig angrily. “I agree father,” said the Warthog. This time the Warthog went down to the pond and stooped over to get a drink.And as he stooped, up came Po splashing and bellowing. The Warthog however was prepared. As soon as Po came up the Warthog reared up and kicked Po in the face smashing all Po’s teeth and knocked his tusks out. The Warthog took the tusks as a trophy, put them in his own mouth, and, bending down drank his fill. Forever after this the other animals jeered at Po and laughing said,” Hit Po hit Po and laughed hilariously for the other animals disliked Po as much as the Pigs for his nasty tricks. So hit Po soon became Hippo as a mark of shame and Po was never a problem again. And that is why Water Elephants are called Hippos and why Warthogs have tusks.

A writer is someone who writes. He might be on the right track! Now what to do with his spelling….

Santeria is a popular religion in parts of southern Florida and more specifically Miami. Apparently it’s similar to Voodoo in some ways. When I took Criminal Law last term my professor said that in Miami the followers of Santeria had a unique way of working towards the release of friends or relatives who had been arrested. They would slaughter a chicken as sacrifice, then take the chicken to the courthouse. Once there they took the chicken and swinging around once, hurled it at the courthouse steps. Imagine lawyers, judges, and bailiffs trying to get to work while trying to walk up the steps without stepping on anything fowl!