So a couple days ago Nicholas was taking out the trash and he called us out to show us something. As it turns out it was this very large toad. 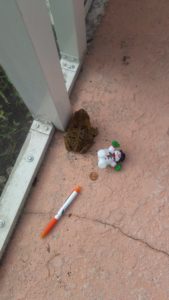 We all watched it for a while, and were really quite impressed with this small rotund creature. The funny thing is, though this toad was fairly large, it was just an ordinary toad. We had frogs in Ohio by the dozens every year, and took little notice of them. Then when we moved to Florida we thought the lizards were quite the novelty. I had never seen a lizards in person before we moved to Florida, because they could not survive the winter in Ohio. Now we think nothing of the lizards and think frogs are a novelty! However, lizards do still freak out Mom  if they get in the living room.